The Have Hammers program was the brainchild of Richard G. Williams in 2007, at Mision San Pablo Orphanage in Los Cedros, Jalisco, Mexico,  creating a basic woodworking workshop for 16 children and teens with four volunteers. Founding donations were a $500 U.S. seed donation, and 3 milk crates of donated or loaned tools.

The first projects were birdhouses and the youth’s own personal 2-foot cubed lockers, followed by towel and baseball cap racks.

Eighteen months later, charitable groups in Guadalajara assumed sponsorship of the Orphanage, so Have Hammers moved to Hope House. 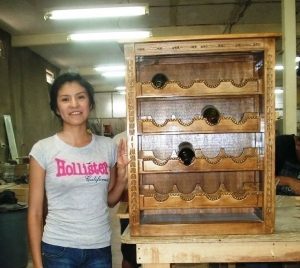 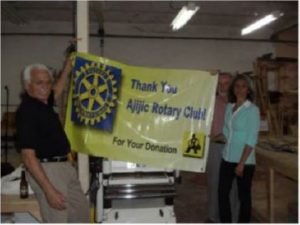 With $720.00 in donations and six volunteers at Hope House home for abused boys in Ixtlahuacan, Jalisco, MX, the program was renamed Have Hammer…Will Travel because regular trips were made to the orphanage and the boys’ home. Projects at Hope House became more sophisticated and included quilt racks, clothes racks, towel holders, hat racks and other items. The tool inventory expanded to include two donated bench machines.

In 2009, Lake Chapala Society in Ajijic, Jalisco, MX, offered space for classes for free, in return for any carpentry repairs needed around the facility. Two weekly classes were started for neighborhood youth ages 10-14, with each class averaging 12-18 participants.

Volunteers increased to 7, including retired professional carpenters – some of whom are still active volunteers. The tool inventory expanded to include three donated hand sanders and two electric drills.

Donations, as well as student scholarships increased to almost $1,000 USD helped by many contributions by Lake Chapala Society members. Workshop projects expanded to include baseball racks, DVD/CD holders, cutting boards, etc. In 2010, the classes increased in size to 14 – 20 students. For the first time, local Mexican carpenters joined classes and guests to inspire and encourage the students. 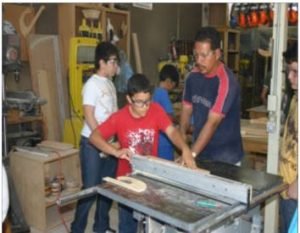 Donations increased to $1,200 USD, and the first annual fundraiser was held, netting an additional 41,000 Pesos (over $3,000 USD). One of the reasons the fundraiser was so successful was due to donations from the Mexican community to the silent auction.

The same year, a new source of income was created when HHWT became a third Beneficiary (along with Lake Chapala Society education programs and Lakeside School for the Deaf & Children with special needs) of funds generated by sales at Casi Nuevo Thrift store in Riberas del Pilar. This partnership gave the program new stability and continues to produce a consistent monthly monetary flow.

In May of that year, Have Hammers rented an 800 square foot building in Ajijic village to house their first donated commercial woodworking machines. Although most of the machines were over 35 years old and in varying condition, they were highly valued donations.

Most of the organization’s funds were spent to renovate the trade school building, to update electrical service, soundproof walls, and repair the usable machines. In  addition, the first full-time local carpenter was hired as the program ́s instructor (maestro). As a result, the older students were moved to the new facility (Level II), while the younger students (aged 14 and below) remained at the Lake Chapala Society classroom (Level I) for another year.

In 2011, the second annual fundraiser netted 46,000 Pesos, while other revenue was generated by student fees, donations, and the Casi Nuevo Thrift Store, totaling 155,000 Pesos (roughly $12,000 USD). In August, the current full-time teacher (maestro) was hired (a local Mexican carpenter). 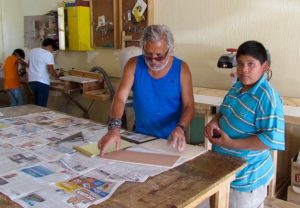 In early 2012, three experienced woodworkers joined the instructor volunteer ranks. Their expertise allowed the expansion of the curriculum to furniture-making. Level II students could now learn to make furniture for sale or personal use, such as tables, bookshelves, wine shelves and coat rack stands, all with detailed carving.

During the annual fundraising event, a generous donor arranged to purchase the first NEW piece of woodworking machinery, and other donations were used to buy the first set of carving tools for furniture-making. To supplement the donations, the Maestro was asked to take on furniture repair and small carpentry projects for Have Hammers during non-teaching times, which continues to produce moderate income on a fairly consistent basis.

In late 2012 two significant events occurred that were turning points for Have Hammers.

Firstly, the program reached its capacity because of the limited size of the old facility. A new and larger facility was found and leased in Riberas del Pilar. Volunteers quickly began required program expansion – building needed work tables and benches and rebuilding the electrical system needed to operate large wood machines. Secondly, volunteers began searching and applying for possible sources of funding for badly needed new woodworking tools and machines. A matching grant application was submitted to Rotary International through the Ajijic Rotary Club, which resulted in $26,000 USD of new machines and tools, most of which were delivered in May 2013. 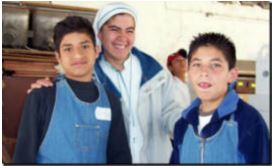 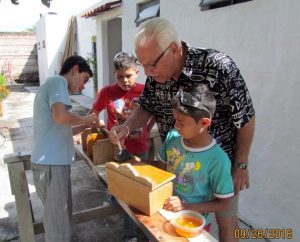 As of December 2013, we had assembled a first-class woodworking shop with all new heavy duty machines and small electric hand tools. At that time we had 16 Level I and 15 Level II students, including 3 women in the latter group. Students progress individually at their own rates and skills through a basic rope carved lamp table while they gradually learn more complicated skills in safety, measurement, carving, jointing and finishing. From this piece of furniture, they move on to a more complicated piece where more complicated cuts, raised panels, drawers, doors, hinges, and shelving are introduced. Each individual student is required to construct two of the same pieces of furniture which then the program keeps one to sell and thus provide funds to replace materials and supplies, and the student keeps the other to sell or take home for family use. These level II students can eventually move into the Level III  (professional) curriculum, which is currently being developed.W